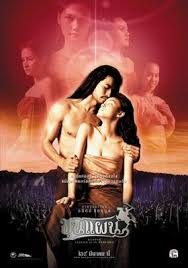 Kunpan The Legend Of Warlord

Based on classical Thai literature, Kunpan is a magical, tragic love story based on the life and times of a strong warrior, Kun Pan. During a time of rebellion, Pan's arch enemy and rival for Pimpilalai's love, convinces the king to send Pan off to battle. He must go off and fight, and leave his love behind. Time goes by, and Pan's rival tries to console Pimpilalai while telling her Pan must have died in battle. Eventually she believes him, and mourns. But Kun Pan is not dead, and he comes back from battle with his second wife, only to find that Pimpilalai is now with his rival. Pan wants... no needs, his revenge. But when the king finds out about the rivalry, he banishes Pan from the kingdom. With nowhere else to go, he ends up in the forest, and with a third wife. There, he gets magical powers both spiritual and material. Again back in the Kingdom, Pan takes Pimpilalai away to live with him in the forest. From there, events continue to happen to complicate his life, that of his wives, and everyone around them in a swirl of fate and retribution, and tragedy.

Like
One Piece: Episode Of Sabo - 3 Kyoudai No Kizuna Kiseki No Saikai To Uketsugareru Ishi (dub)
2015
Watch Now